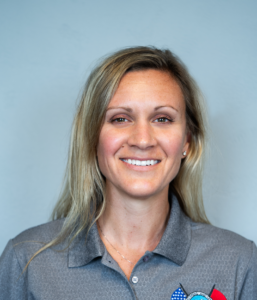 Bio
Kilah Engelke began her career in construction intending to fund a college education. Her step father was an estimator for one of the biggest concrete road building operations in the Midwest at the time and he put her and her brothers on the crew to pay for school. Having always been competitive and an athlete, she took an immediate liking to the challenging and fast paced environment, to always being outside and never being trapped behind a desk and to being extremely physical. After spending three summers as a Laborer, she was offered the chance to pursue an Apprenticeship in 2001 with OPCMIA Local 599 in Wisconsin and she decided to go for it. She graduated in 2005 as a Journeyworker and jumped on the opportunity to fill the open Labor Trustee position on the Local 599 Area 558 JATC; the work of the JATC eventually led in 2011 to her applying for the newly developed Apprenticeship and Training Coordinator position for the Local. For her first three years as Coordinator, she worked for half of the year in the field as a Heavy Highway Cement Mason and for the other half of the year for the program operating the Apprenticeship and Training program. The program grew and in 2015 her position with the Local became full time and her representation was Statewide. Over the years in the industry and through becoming more and more involved, Kilah continued to grow her understanding of the Union and Organized Labor and although she loves being a teacher and training, she decided that since 2018 was an election year for her Local it was time to run for Business Agent. She won an extremely contentious election by what we call in politics a ‘landslide’ earning twice as many votes from her membership as her opponent. She currently has been in the industry for 22 years and PROUDLY serves as Business Agent and Recording Secretary for OPCMIA Local 599, as a Labor Trustee and Financial Secretary for the OPCMIA Local 599 Area 558 JATC, and as the Financial Secretary for the Milwaukee Building and Construction Trades Council. Kilah is a proud founding member and serves as a Chairwoman for empowHER, a powerful group of women from Building Trades positions all over WI whose mission includes promoting leadership for women in all facets of the trades, sustaining and retaining the women that we have, and organizing by being visible examples of successful women in the trades in the communities we live and work in. Her International named her Chairwomen of the OPCMIA International Women’s group, the Steel Edge Women of the OPCMIA in 2019 and she looks forward to achieving advancement opportunities for women through helping to break down barriers and level the playing field through developing things like maternity leave programs, and anti-harassment education and awareness initiatives. She has a passion for her work that she intends to share by being an example and reaching out to others who may not see themselves as construction workers or leaders in the industry and she looks forward to the day when it’s no longer a spectacle to see women not only on the jobsite, but also having a seat at the table when decisions are made in this ever evolving and dynamic industry.

Why Kilah Was Nominated
It is my pleasure to nominate Kilah Engelke of Operative Plasterers and Cement Masons (OPCMIA) Local Union #599 in Milwaukee for the 2020 Tradeswomen Heroes Award. Kilah is an excellent role model for women working in the construction industry and truly embodies the traits that women working in construction rely on to succeed and elevate themselves. Kilah began her apprenticeship as a cement mason at local 599 in 2001 and graduated in 2005. She continued to work as a Heavy & Highway Journeyworker and took the knowledge she learned to become her local union’s Apprenticeship and Training Coordinator in 2011. Over the last two decades, the number of women entering union construction trades increased and it is no coincidence that Kilah’s dedication and mentorship has helped many of these women find their way into the industry and succeed in it. She recently started a mentorship group at the Milwaukee Building & Construction Trades Council, called empowHER. Its mission is to help all women working in the industry, from apprentices and project managers to the women working as advisors, counselors, admins and so on. This group helps provide support, advice, community outreach and networking opportunities to help increase the success of women in the industry. This is the very first group that was ever formed in Wisconsin and its membership continues to grow steadily. It is not, however, the only way Kilah gives back to the community. She leads career events for OPCMIA #599, the Milwaukee Building Trades Council and the Milwaukee Area Labor Council. She personally arranges hands-on events at area high schools giving all students interested in the trades the opportunity to see what it takes to earn an apprenticeship first-hand. For the last five years, she has personally instructed and provided all the labor to the Knights Construction Program in the City of Oak Creek performing all the concrete work associated with their home-building program. Her contribution not only provides 25 students with invaluable learning experience but it also saves the school districts thousands of dollars in home building costs. Kilah serves as an area Business Representative, Financial Secretary, Recording Secretary and remains a beloved Apprenticeship Instructor for OPCMIA Local Union #599. She sits on the Milwaukee Area Labor Council’s Executive Board and participates in numerous volunteer events. Here at the Milwaukee Building Trades Council, she serves as our Financial Secretary and plays a major role in our youth outreach and development program. I’m sure you will receive many outstanding nominations for this award, but none are more deserving than she.