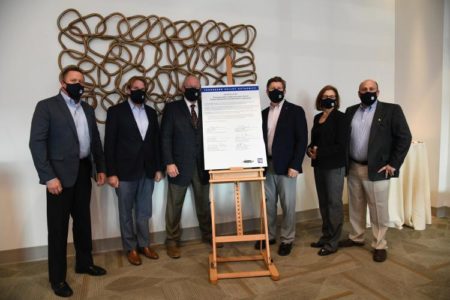 “TVA and the Building & Trade Unions have been partners since TVA’s inception,” said TVA President and CEO Jeff Lyash. “TVA was built by trades & labor workers.

“Until now, the customary extension period for Project Labor Agreements has been five years.” This first-ever 10-year agreement will extend into 2031. It is historic in length and represents a commitment to our partnership.”

The PLAs designate NABTU as the official bargaining unit for all TVA partner contractors that utilize represented skill craftsmanship. They cover the terms and conditions of employment on projects, such as quality of work, productivity and timely completion. Competitive advantages for both TVA and its union partners include prevailing wage agreements, shared understanding of work rules and priority in referrals and resolution of labor shortages.

TVA and the building and trade unions have been partners since TVA’s inception, with TVA dams, generating plants, transmission lines and facilities all being built by trades and labor workers.

“TVA and NABTU have set the standard for successful labor management cooperation for almost 90 years,” said North America’s Building Trades Unions’ President Sean McGarvey. “All other successful models replicate this partnership where workers have a seat at the table, and we work together to create and maintain middle-class family sustaining jobs and bring affordable power and economic development to families and business in the Valley.”

“With this agreement, we begin writing the next chapter in the continuing story of our enduring partnership and outstanding success together,” added Lyash.

TVA is the largest employer in the Southeast of NABTU-represented trades and labor workers. During outages and construction, TVA can employ 5,000 or more NABTU workers.

The following unions are covered by the PLAs :

The Tennessee Valley Authority is a corporate agency of the United States that provides electricity for business customers and local power companies serving nearly 10 million people in parts of seven southeastern states. TVA receives no taxpayer funding, deriving virtually all of its revenues from sales of electricity. In addition to operating and investing its revenues in its electric system, TVA provides flood control, navigation and land management for the Tennessee River system and assists local power companies and state and local governments with economic development and job creation.